The Cookhouse, at 31 Danbury Road in New Milford, is an award-winning Barbecue restaurant. No really, They have been rated Best BBQ in Connecticut several times by The Advocate and other magazines. So I had go and see what all the fuss is about.

Luke, the General manager took great care of us and provided a really great menu of Cookhouse favorites for me to review.

Luke, General Manager and I pose in front of Fat Tommy, The Cookhouse mascot.

First up were the appetizers, I started with the Super Nachos, fresh taco chips, chili, pepper jack cheese, fresh tomato salsa and a lime sour cream for dipping.

Next in line were the Sweet Creamed Corn Pops -tasty fried thingamajigs with molten sweet corn inside with a BBQ ranch dipping sauce.

They look like hush puppies but taste MUCH better.

My final appetizer was Mom’s Mac & Cheese, with bacon, jalapenos, and three different cheeses, WHAT! 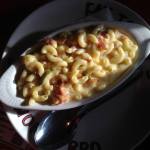 In between course, General manager Luke to a minute to tell me all about the cookhouse.

With the appetizers done, it was time to take on the entrees. First up, Luke brought out their eponymous burger, that’s my new word for the day, it means having the same name. The Cookhouse burger is a 1/2 pound of their own blend of prime rib, brisket, and organic beef chuck, ground fresh and hand formed. Bacon, sautéed onions, pepper jack cheese and comeback sauce served with house made potato chips.

Hooray for that burger! 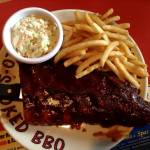 Time to get messy!

The final entree was  famous Pulled Pork Sandwich- a combo of hot pulled pork, cool coleslaw, and a yummy sauce on a special bun with amazing sweet potato fries.

Finally it was time for my favorite part of every meal, DESSERT! The Cookhouse did not disappoint. Luke brought out the Oreo cookie ice-cream pie. Locally made ice cream, (Inn at Newtown) with an Oreo crust and then more chunks of Oreos smooshed on top.

I’d go back to the Cookhouse just for this!

For atmosphere food and kid friendliness I give the Cookhouse my highest rating of BAM GOOD!